Priya Thekkumparambath Mana has developed a passion for the martial arts with her husband Arun Devaraj since moving to Richland two years ago. ANDREW JANSEN — Tri-City Herald

When Arun Devaraj began looking for a wife, he knew she would have to accept his passions in life.

The materials scientist is very dedicated to his research at Pacific Northwest National Laboratory in Richland, he said. He enjoys hiking and the outdoors. Plus, there’s karate.

“I’m going to practice martial arts for my whole life and you have to be OK with that,” the 30-year-old recalled writing in his online profile for a matrimonial website. “That was the first thing.”

He got that and more when he married Priya Thekkumparambath Mana, 24, two years ago. The Richland couple didn’t meet until months after they decided to spend their lives together.

And when Devaraj’s new wife came to the U.S., she learned karate.

“It’s a shared passion,” she said.

“It’s about pushing yourself”

Devaraj moved to the United States in 2007 to pursue a doctorate in materials science at the University of North Texas. It was there he began training in karate.

He had always been interested after watching Bruce Lee movies as a kid and dreaming about defending himself against bullies. It was after he began training that he realized karate was less about fighting and self-defense, and more about personal advancement and working to be a better person.

“Life is all about pushing yourself beyond what you think you’re capable of,” he said. 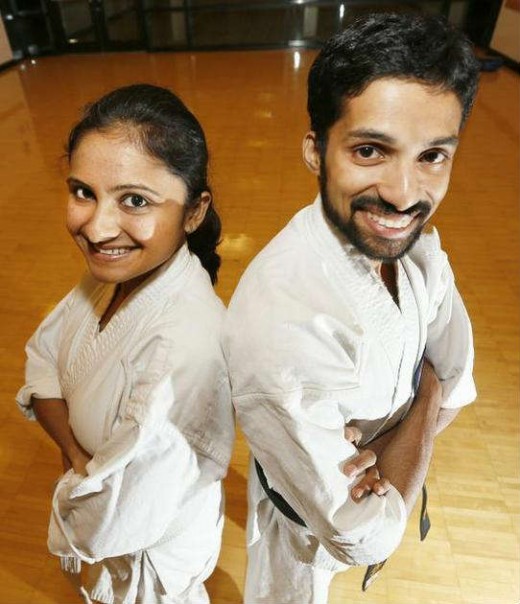 He became hooked. And when he moved to the Tri-Cities in May 2011, his connections in Texas introduced him to Pam Logan, an engineer at the Hanford site who was also a karate trainer.

“He’s a very serious, very dedicated student,” Logan said, noting Devaraj is gregarious with others in training and helps them.

Devaraj began thinking about finding someone with whom to spend his life and began searching online in 2012.

Indian culture has set rules for courtship, with parents often making the final determination about who their children marry. Devaraj wanted to find his own partner but didn’t want the typical U.S. dating experience, relying on matrimonial websites rather than dating sites.

That’s how he came across Thekkumparambath Mana’s profile. He became interested in her similar background. She spent much of her life in northern India but had roots in the south of the country and worked as a software engineer.

“Oh, and she had beautiful eyes,” he said.

Thekkumparambath Mana said Devaraj “looked kind of geeky” but it wasn’t long after she started talking to him that she felt a connection, sharing his love for the outdoors and science.

“We were going to get married after chatting for two days,” she said. “It took three months to convince our parents.”

The couple talked frequently via Skype and texts for several months. Though not typical of what people see in the U.S., their courtship was no less intense or romantic, Logan said.

“I do remember when he wasn’t sleeping well because he was up all night talking to her,” she said. “We teased him a bit about that.”

Devaraj went to India in August 2012 to be formally engaged to Thekkumparambath Mana. He enlisted his brother’s help in having a banner made with her face on it as well as a message asking her to marry him. They unfurled it when they met her at the airport, with Devaraj getting down on one knee and presenting an engagement ring.

“Yeah, it felt good,” she said of their first meeting.

Priya Deveraj and her husband, Arun, on their wedding day. COUTESY GAURAV GUPTA

They married in January 2013 in India and returned to the Tri-Cities. It was four days after arriving that Thekkumparambath Mana had her first experience with karate, when she accompanied her new husband to a training session.

Women in India aren’t encouraged to learn self-defense and generally lead sheltered lives as social conventions encourage them to stay home and not be independent, Thekkumparambath Mana said. Seeing her husband and others in training made want the confidence and control karate provided to them.

“Mentally, I felt like I was stronger (than I looked),” she said. “I saw this as an opportunity to become stronger.”

“She looks small and feminine but she’s a tigress,” Logan said. “Her strongest gift is her mentality.”

The couple train together and have attended intensive camps where they are pushed mentally and physically, they said. It’s brought them closer together, showing that each can stand on their own but still support the other.

“It’s easier for us to deal with the tougher moments,” Devaraj said.

Devaraj and Thekkumparambath Mana will celebrate their wedding anniversary and Valentine’s Day in a week, when they travel to an Oregon resort and then Portland for a getaway.

They credit their unique courtship and shared passions to their relationship’s success.

“You should know what you want before you actually try to look for someone,” Devaraj said.
Read more here: http://www.tri-cityherald.com/2015/02/13/3409231_richland-couples-bond-grows-stronger.html?rh=1#storylink=cpy

As an Amazon Associate, SKA earns from qualifying purchases